In the early hours of Monday morning, al Qaeda founder and leader Osama bin Laden was shot and killed by U.S. Forces. Credited as the mastermind behind the September 11th terrorist attacks, bin Laden was killed in a house about 30 miles outside of Pakistani capitol Islamabad.

And now, as word spreads across the globe about the news, Facebook Pages and shared news stories about bin Laden are gaining significant attention.

As you can see in the search results image below, the Osama bin Laden is DEAD Facebook Page appears to have the most fans thus far with nearly 315,000 and counting. Both legitimate and SPAM comments are made every few seconds. Interestingly, the Page appears to have been created back in January 2011. 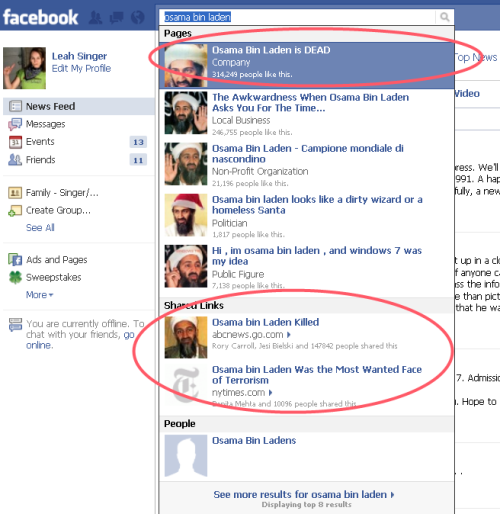 In the description section of the Osama bin Laden is DEAD Facebook Page Info tab, it reads:

Osama Bin Laden has not been found and will never be found because he died a long time ago. This may be news to you because it wasn’t in the news. His death is critical to the CIA because they want you to believe in this so called ‘War on terror’ which has made the world a more dangerous place. If Osama Bin Laden was alive, he would’ve been found—just like Saddam Hussein. Just remember, its impossible to find a dead person. Google: Tim Osman. 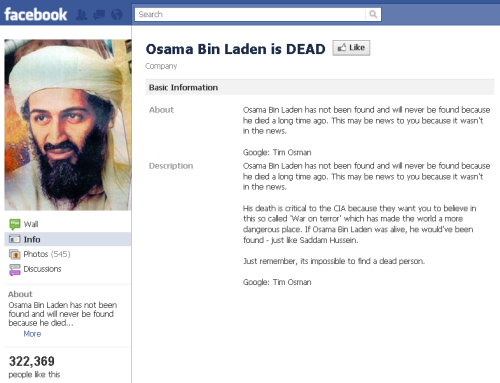 In the short time (about 15 minutes) that it took to write this blog post, the Page has gained over 10,000 new fans.

Did you Like the Osama bin Laden is DEAD Facebook Page? What are you thoughts about Facebook users’ responses to bin Laden’s death? Please leave your thoughts in the comments section below.