Personally, I have not been following the Anthony trial. But many of my Facebook friends and those who I follow on Twitter have been, and most were downright outraged at the verdict. Below is a screenshot of my actual News Feed; notice the huge engagement response from the msnbc post. 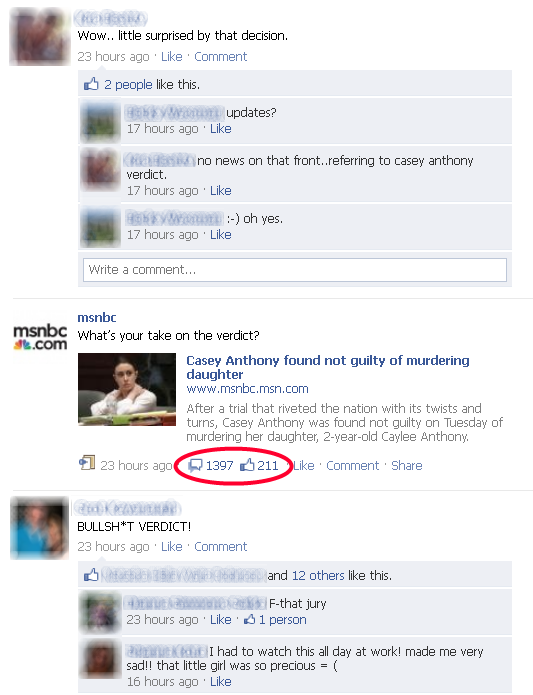 I know many within my social graph are upset at “the media” for how the Casey Anthony trial has over saturated TV and the internet – especially social media. Time Magazine dubbed it the “Social Media Trial of the Century.” But is the media really to blame? These outlets, either on TV or online, are giving their readers and viewers what they want – which appears to be an appetite for the incomprehensible and extremely sad. Ratings soared for TV news outlets when a story regarding the trial would air. According to the Los Angeles Times:

Far away from the Disney-dominated tourist hub, trial coverage ratings set new records as well. Viewers latched onto the salacious case and its shocking conclusion, boosting the wall-to-wall coverage on cable channel HLN to the best ratings in its history.

It’s fascinated so many people to the point where, according to Mashable.com, when Anthony’s verdict was read yesterday afternoon, news websites like CNN.com had a significant traffic boost:

CNN saw an online traffic spike as well. The network tells us that more than 1 million users were watching CNN.com/live between 2:00 p.m. and 3:00 p.m. This was 30 times higher than the prior four-week average.

Some compare the Casey Anthony trial to that of O.J. Simpson. Now that I followed. I was in seventh grade and I watched the verdict with my entire geography class. I remember I couldn’t believe it. Not guilty?! Are you kidding me?! But this was well before the days of social media when I couldn’t take to my Facebook profile to share my confusion.