Oneupweb : Is Apple Really Recording the Position of Your iPhone or 3G iPad into a Hidden File?

I remember hearing a news story which originally made headlines in April of 2011, and it explained Apple recording the position of your iPhone or 3G iPad into a hidden file. I first heard the story, then read a few articles on the topic, and then I pretty much dismissed it. It seemed as though, in my case at least, the “hidden” file (named consolidated.db) was not accessible. Either that or my iPhone wasn’t actually recording the data. Boy was I wrong! 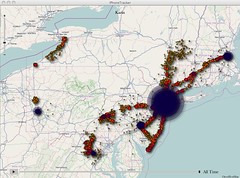 I was initially unable to access and plot the information, because I chose to encrypt the data when creating a backup. As I read more into this topic I realized that once the backup is unencrypted, you really can plot all the information (geo-locations and time stamps).

As noted by Alasdair Allen at O’Reilly Media,

“All iPhones appear to log your location to a file called “consolidated.db.” This contains latitude-longitude coordinates along with a timestamp. The coordinates aren’t always exact, but they are pretty detailed. There can be tens of thousands of data points in this file, and it appears the collection started with iOS 4, so there’s typically around a year’s worth of information at this point. Our best guess is that the location is determined by cell-tower triangulation, and the timing of the recording is erratic, with a widely varying frequency of updates that may be triggered by traveling between cells or activity on the phone itself.”

How can you look at your own data you ask? There are now a few Windows compatible applications available. One of which being iPhoneTrackerWin, or you can just search Google.

What about securing your information? Allen recommends, “An immediate step you can take is to encrypt your backups through iTunes (click on your device within iTunes and then check “Encrypt iPhone Backup” under the “Options” area).”