A hilarious drawback to installing Facebook Comments on your blog was showcased on TechCrunch Tuesday when Jeremy Krumsick used his Facebook account to leave a comment on the TechCrunch post titled: German Court Suspends Galaxy Tab Injunction In The Apple-Samsung Case. Below is a screenshot of the interaction between Jeremy and his mom: 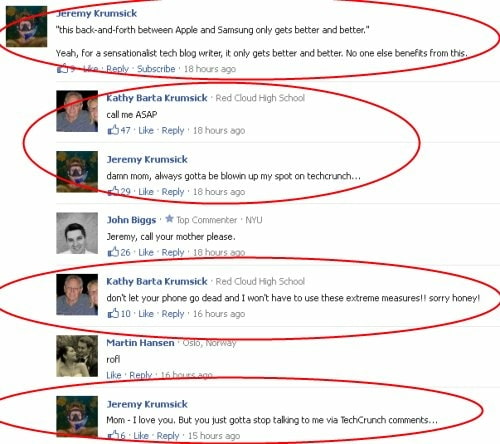 As TechCrunch’s MG Siegler noted, many bloggers and websites implemented Facebook Comments onto their websites so as to deter trolls and spammers from submitting crummy comments. However, as several TechCrunch readers found out, there can be a drawback to this feature. Siegler writes:

Because the comments get pushed back to commenters’ Facebook Walls, anyone is free to respond from there, off-topic or not.

So Jeremy’s mom probably saw his TechCrunch comment in her News Feed and made her wonderful mom comment – “call me ASAP.”

This is great because it seems many Facebook users (and perhaps TechCrunch readers) can relate to Jeremy’s Facebook “mom situation.” I could certainly see my mother doing something very similar. Could you?