Corporate greed, high gas prices, unemployment, lack of health care benefits, these are a few of the grievances protesters around the United States are gathering against. We’ve seen in the past few years an increase in unrest amongst the lower middle class, and it appears they’ve had enough.

Many believe they have good reason to be upset. The top 1 percent control 42 percent of financial wealth in the U.S.

To illustrate this, here’s a pie chart comparing three different countries and the distribution of wealth amongst its people.

Over the past three weeks protesters have been gathering all over the United States to take a stand against the current state of the country, including President of the United Federation of Teachers Michael Mulgrew. Of the protest he said,

“The way our society is now headed it does not work for 99% of people,” 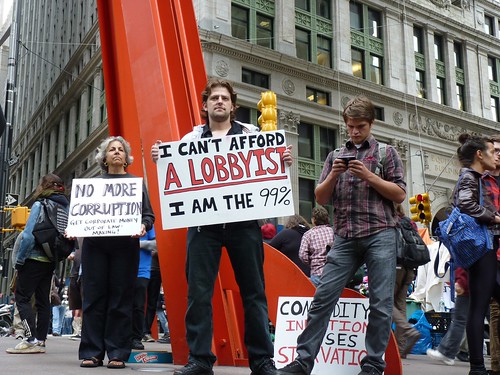 Years ago F.D.R had a different vision for America than the one we currently are experiencing.

“For unless there is security here at home there cannot be lasting peace in the world.”— F.D.R

How did you hear about #OccupyWallStreet? Was it through social media channels or perhaps traditional means of media?