Oneupweb Reviews: The Down Side to Source and Crowd

Sourcing and crowding seem to be the words for the last decade in the business and finance world. From outsourcing to crowdsourcing, the terms have been both beneficial and exploiting, to say the least. When first introduced to a group of people in whatever way it is going to be used it appears to be a friend, but give it some turn of events and we start to see the face of the frenemy. Like a great villain out of a comic book.

With offshore out-sourcing we have watched some of the good, the bad, and the ugly with its development over time. Big USA corporations ran to the opportunities they found in raising their profit margins by taking some of the labor overseas. As stated in the CIO 2003 report “offshore vendors [in] IT work costing $100 an hour in the United States can be done for $20 an hour in Bangalore or Beijing.” – The Hidden Costs of Offshore Outsourcing. There was good to be found in that tactic, but over time I think many of us can agree we have witnessed the bad that has followed along with some ugly. 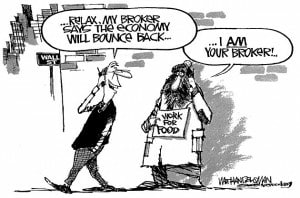 Then there is the topic of crowd-sourcing. In this term I am referring to the act of sourcing tasks, skills and/or talents traditionally performed by specific individuals/professionals to a crowd of people and/or community through an open call. There are of course some benefits to this call.

But then there are the down sides, like truly talented people being lost in the crowd, or professionals working harder to keep their previous margin alive. For example, as many of us are enjoying the great benefits of a tool like the website iStockphoto professional photographers are not. I’m talking about the photographers that spent a pretty penny on schooling, or gave great time and strife to an apprenticeship position so as to gain that professional skill while spending another pretty penny on the equipment to provide the product.

I will be the first to admit that there is some definite benefit in sourcing and crowding for a company and/or individual, but it is a tactic that when employed should be strategically thought out for the long term. I feel people are jumping way too fast on to the short term benefits without realizing the effect it could have (and has had) in the farther scheme of it all. Therefore, I give these two verbs a sideways thumb. To me, we are still babies in the theory.

How about you? What are your thoughts?