2011 has become a year known for its world-wide protest movements – often inspired by the advent of social media. 2012 appears to be starting off on the same foot and that collective voice is on a march. From the Middle East protests against regimes to the 99%’s Occupy Wall Street protests against the 1% Mega Rich of the United States, a protest has indeed taken root and it doesn’t look like it will recede anytime soon. 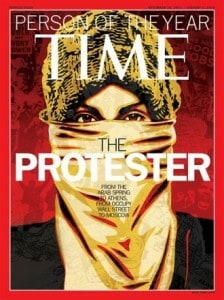 That is unless come January 24th, 2012, two bills get passed in the legislature: the Stop Online Piracy Act (SOPA) and the Protect IP Act (PIPA).

SOPA is “a law of the United States of America proposed in 2011 to fight online trafficking in copyrighted intellectual property and counterfeit goods… The bill would criminalize streaming of content, with a maximum penalty of five years in prison.” (Wikipedia: House Bill 3261)

PIPA (Protect IP Act or Preventing Real Online Threats to Economic Creativity and Theft of Intellectual Property Act of 2011) is “also known as Senate Bill 968 or S. 968, is a proposed law with the stated goal of giving the US government and copyright holders additional tools to curb access to ‘rogue websites dedicated to infringing or counterfeit goods’, especially those registered outside the U.S.” (Wikipedia: Senate Bill 968)

SOPA and PIPA could have negative results in the long term on Internet speed, security and innovation if passed. The two bills intend to stop online piracy and protect copyright holders, but observers claim they will infringe upon creativity, Internet security and innovation. They infringe on these by punishing websites that link to any copyright-infringing sites, even by accident.

Oneupweb supported the stand against the SOPA and PIPA bills presently being considered in Congress. In a public announcement yesterday Oneupweb stated:

“While the intention behind the bills is to stop copyright infringement, they are drafted in such a way that is incompatible with the current open and free Internet as we know it. These bills, as they exist presently, will do little to stop piracy. Instead, they will stifle innovation, promote censorship, and break how the internet functions.”

Of course the big wigs of websites like Google, WordPress and Wikipedia also protested the bills by performing blackouts on the 18th of January, 2012.

Google launched a petition page that gathered 4.5 million signatures just on the 18th alone. Wikipedia’s blackout caused a Twitter freenzy in the hashtag #wtfWikipedia, which caused a real time page to be created that showed the millions of tweets on its blackout.

To better understand the intention and the backlash against PIPA and SOPA watch this video:

In response to the mass blackout day across the Internet people also came out from the New York tech community and gathered to protest SOPA and PIPA on Wall Street. Around 1,500 people were in attendance.

Something to know is that PIPA is a rewrite of the COICA Bill (Combating Online Infringement and Counterfeits Act), which supporters unsuccessfully attempted to push through in 2010. The same thing happened with the SOPA bill. Therefore, something to also note is that though we may beat SOPA and PIPA this time around (and we better with 4.5 Million signatures from the Google petition be end day of Janurary 18th, 2012), we may be protesting revised versions of these in the not-so-distant future. 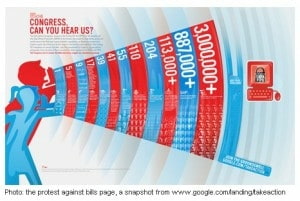 We at Oneupweb support the movement against SOPA and PIPA. We have a right to a voice and we give the movement two thumbs up!

Where do you stand and how do you feel about this movement?