In an amazing discovery, student archeologists uncovered and actually deciphered what is being heralded as the first known social media site 10,000 years before the Internet was even conceived. 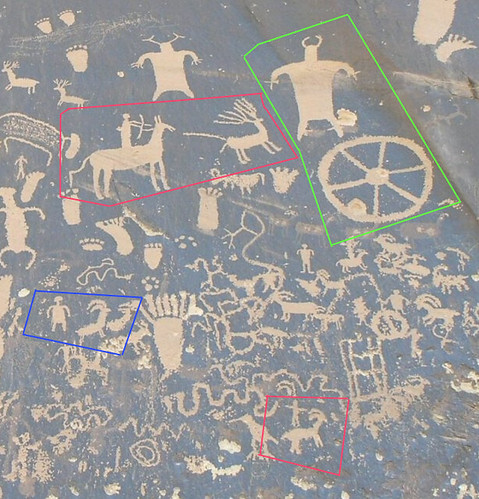 Although not all information has been made public, some of the original posts and translations are shown below. 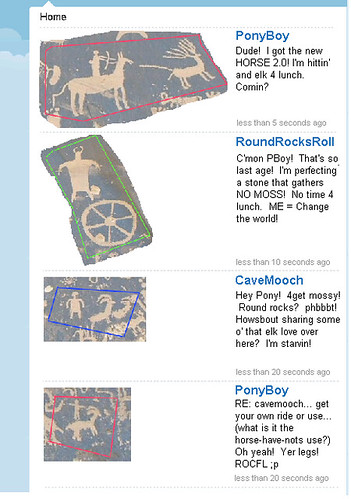 What?  Not social media you say? Hmm….  Well, let’s start with the official definition of social media.

Media created using tools that are highly accessible by the masses which also facilitate
communication related to the media.

Doesn’t a cave painting fit that bill? Countless people over thousands of years have visited that wall, contributed to and learned from it. They have recorded their daily struggles, their achievements and the mundane day-to-day events. If that isn’t social media, what is?

Still not convinced? Well, considering the definition I gave you was mine, I guess I can understand. In the spirit of actual research, I asked five well-informed people for their definition of social media.

Here is what I got (names have been changed to protect the innocent):

Edna: For businesses: social media is humanizing companies whilst promoting transparency through honest engagement with people. In other words, enough with the crap. For people: social media helps people connect and communicate with each other better than ever before.

Pierce: Social Media is a blanket term which describes the technologies and methods people (and businesses) use to communicate online in an effort to share opinions, experiences and perspectives.

Fredrico: Use of tools, usually online, that allow people to share thoughts, comments, stories, links, photos, and videos with friends, colleagues, and strangers.

Linda: Connecting (networking) person-to-person on the internet through user-generated content.

Beauford: Ok, social media is a kind of opt-in push delivery mechanism by which you are connected to people with like interests in near real-time. It’s all about immediate two-way communication, whereas the old guard was about one way.

I couldn’t find an actual definition in the dictionary, but looking online turned up additional definitions.

So what is social media? I maintain my definition is right (including cave paintings and bulletin boards at grocery stores), but at this point, I need to admit to a really old trick used by magicians (and “experts”). It’s called misdirection, because guess what? It doesn’t matter.

It starts to become clear why there are so many experts. If you consider the fliers that you just printed for the local teen dance to be social media, and you were the one that made ’em… hey! You are an expert. It’s great to be an expert; oh the perks!

None of this addresses the real question: How can your business harness the awesome power of digital media, smite its competitors, and claim its rightful position at the top of the food chain?

Can you channel the power of this media tempest? Yes. How? That changes every day.

Find someone who is immersed in this new sea. Instead of hiring a swim coach, find a swimmer who crosses the ocean each day and ask them what’s important. Keep them close. Tomorrow, the most relevant thing will be different – and they’ll know about it.

Social media isn’t Facebook, Twitter, YouTube, Flickr, <insert endless stream of social sites here>. It isn’t the web, newspapers, or bulletin boards. It’s all of these things and an 8,000 year old hand painting on a cave wall.  It isn’t new and it changes faster than the weather.

Right now, you have the opportunity to be more responsive, aware, proactive, and adaptive than ever. The channels are there, and early adoption is the edge you have over your competitors.

The current is pushing us all the same way. You can swim against it or drift along. Better yet, swim downstream and be there waiting with a towel when everyone else gets out.

The Premier Social Media Expert of the Universe (TPSMEU)

*Editor’s Note: If you like the information in this blog, check out our blog that is dedicated to social media at StraightUpSocial.com.