Behind the Scenes of a Small Copy Editing Incident 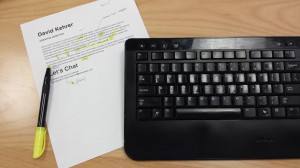 In the world of newspaper, magazine and book publishing, there is simply no controversy about this: Every piece of writing needs an editor – every article, every blurb, story, column, caption, table of contents, letter to the editor, every obituary.

Twain, Hemingway and “Dear Abby” were edited, and so should any content that represents your business.

Making you look good online and in print, editors, fact checkers and proofreaders are your friends.

I was reminded of this the other day when I brought some copy edits to our new creative director. The corrections were for his new bio that had been written (not by him) and urgently published that day on our website, and he was genuinely appreciative.

I want to give some credit to David and his designers because they are some of the most welcoming and receptive art staff I have every worked with when it comes to corrections.

Designers, you see, can view post-layout corrections as a chore that unfairly falls on them just because the files in question happen to live on their hard drives. Designers are often, how can I say this – a lot more interested in the beauty of their layouts than what the text says.

But the Oneupweb designers believe that when their work is matched with great messaging, it makes their web pages more effective. They have the perfect attitude about keying in tedious text corrections, and I appreciate that about them.

David, who got a big promotion last week from creative manager to creative director of the agency, was genuinely happy to implement the copy tweaks in WordPress.

If you haven’t had the pleasure of meeting David, let me tell you, he has very unexpected interests for a guy with an advanced art degree: Major League Baseball, NFL football, ice fishing and taking his son to monster truck shows. The former college baseball player is also the kind of “low blood pressure,” no-drama guy that the creative types on our design team love.

Because of the well-deserved bump upstairs, his bio was assigned and urgently published on our website’s “About Us” page – an important page where potential clients go to learn about the folks running the show around here.

Below is the original copy that came to my desk, and my minor markup. Below that, I include the thought behind each edit.

There’s nothing wrong with the first line, but it flows better taking “design” from the heady academic concept to the concrete with “designs,” and then we need to use “drive” for proper subject-verb agreement. In the original, the grammatically correct version of “on and offline” would have a dangling hyphen with “on,” as in: on- and offline. But that is not always the best route since people unfamiliar with the rule might find it awkward. To eliminate the dangling hyphen’s necessity, we switched it to “online and off.” Plus, because we’re a digital marketing agency our work is primarily online so it makes sense to mention that first.

So, there you go: a well-written piece that still had ten tweaks. An extra step? Sure, but Spell Check only gets any piece of writing so far. Human editors take pieces to the next level, even pieces that might only be 140 characters long.

As a content producer, if you don’t have anyone handy who can serve as your editor then wait a day before you publish it. First thing the next morning you will see the text with new eyes, and improvements that you did not see the day you wrote it will start popping out at you.

If you have to publish “now” – and sometimes you do, then go back later and revisit the copy you published. Even pieces that are perfectly edited by pros can have errors incidentally introduced during the implementation process, and should be checked – not forgotten about – once they go live.

The great thing about the online world is that errors are not immortalized in print like in the old days – they’re sitting digitally in content management systems, waiting to be corrected with the click of a mouse, the tap of a keyboard.

Next week: My editor goes over the corrections they made on the first draft of this piece. (Ha ha… j/k)