Ever since my visit to the ruins of the great ancient Mayan city of Chitzen Itza a few years ago, I have felt very enlightened and have also been very curious about the date of December 21, 2012.  Using the available internet research technologies and sources such as search engines, social media sites, and travel review sites, I have been digging to find out more about the history of the Mayan civilization, the significance of this upcoming date, and to plan my return visit.

I found that between 200 and 900AD, the Mayan civilization flourished throughout Central America as they cleared large areas of the dense jungles and erected massive cities and pyramids.  During this time, they also developed their advanced and complex writing systems, mathematics, and very accurate astronomy charts. 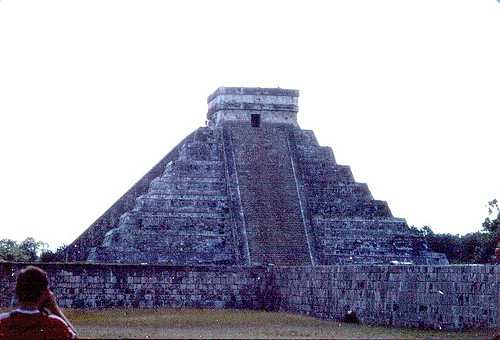 From the numerous hand crafted sculptures and statues that lay scattered and overgrown in the jungle that surrounds, to the majestic Temple of Kukulkan pyramid rising some ninety feet over the landscape, there was a very mysterious and overwhelming presence.  I hear that visitors are not allowed to climb the pyramid anymore (as I did during my last visit), but I think that visiting the ancient city would still be well worth the trip.

Interested in the significance of this December 21, 2012 date, I searched Google for the term “Mayan Calendar” and found many fascinating results.  The Mayan Calendar apparently begins with the “creation cycle”, which corresponds to our year 3114 BC. It also closely coincides with the estimated birth of many of the first ancient civilizations, such as the ancient Eqyptians and Sumerians.  Following were then 13 cycles of 144,000 days each, with all coming to an end on December 21, 2012.  There are many interpretations of what the end of this calendar means, with one of them saying that this signifies the end of all creation.

Numerous social media websites such as The 2012 Forum have many people talking, all with different opinions.  The Doomsday view of the date isn’t really the angle I like to take on the subject.  Yes—the Mayan calendar ends on this date, but the meaning is still open for interpretation.  “A new awareness or global change in consciousness” is another (less threatening sounding) interpretation of the meaning.  Although, I should point out that cataclysmic events such as global earthquakes, flesh burning flares from the sun, life ending meteors, polar magnetic shifts, and alien invasions sound much more interesting to most people, and especially Hollywood.

The website for the upcoming movie 2012 is utilizing many social media aspects to promote the movie, and its hype is just now beginning to pick up speed with the help of the iPhone Apps and the Survive 2012 game.  There is also the “Vote for the Leader of the Post-2012 World” site, where I have already cast my vote for the new leader to ensure the survival of the human race.  I’m not sure how they picked these eleven individuals as prospective future leaders of the apocalypse, but I think I picked the best representative out of the group (I’m not telling who).  Social media has definitely found its way into Hollywood mainstream in both the promotion of the movies and throughout the advertising that references Twitter and Facebook and plays in previews before a feature film begins.

And it’s also impacting my future vacation plans. As I like to plan ahead when making travel arrangements, I’ve already used several social media review sites to shop and compare the best available deals. Websites like Trip Advisor or My Travel Guide will probably point me in the right direction and allow me to hear what other travelers have to say and what recommendations they may have.

Even if it’s not a front row seat to the end of the world, the man made and natural wonders involved in the design of this ancient Mayan city will come alive on “doomsday” December 21, 2012, the day of the Winter Solstice.  Apparently twice a year on the days of the summer and winter solstice, the sun lines up and shines directly on the corner of the pyramid, leaving one side in total sunlight and the other in total shadow.  The large statues of the serpent heads at the base of the staircases are then said to “come alive”, as the shadow trails behind them on the staggered steps start to slither down the pyramid and return to the earth as the sun sets.  I don’t even like snakes, but this sounds really exciting!  I’ve been looking for some captured footage of the phenomenon, but haven’t really found a good video of it yet.  Does anybody have a good source?

I have already made the pet sitting arrangements for my dog and have my passport in check, but I’ll give it another few years before I put in my PTO notice for work.  Who’s coming with me?