Ah, the Super Bowl. It’s a time to gather together, eat lots of unhealthy yet incredibly delicious snacks and critique the year’s best and worst ads. And for those who feel like sitting that whole time, I suppose there’s a bit of football you can watch as well (if you’re not getting up in-between ads to refill your snacks and what not).

I have to admit, ever since I can remember I loved to watch the ads that would play during the Super Bowl, then discuss which was the best/worst the next day at school and later, work. Pepsi always seemed to be a contender for one of the best ads every year, which is why it may seem shocking to some that in 2010, they will not run a single ad during the Super Bowl. Not even for a second. Instead, they are choosing to put their advertising dollars towards social media.

According to the Wall Street Journal, Pepsi says it will spend 60% more on online ads in 2010 than it did this year. The article goes on to state that social media is “the best way to reach younger audiences— Pepsi’s primary target—and to keep consumers involved with its brand.”

Social media is growing in importance every day. If you consider the number of people who are currently on social networks (billions served), it’s jaw-dropping. But the thing that gets me is how social media presents a way to keep users interacting with your brand, something a 30 second television commercial can’t do.

For example, Pepsi will be launching the Pepsi Refresh Project as their new 2010 social campaign. They will be encouraging people from around the world to propose community projects, and then urging them to vote for their favorites. They’ve already set up a Facebook page for this, which you can see below. 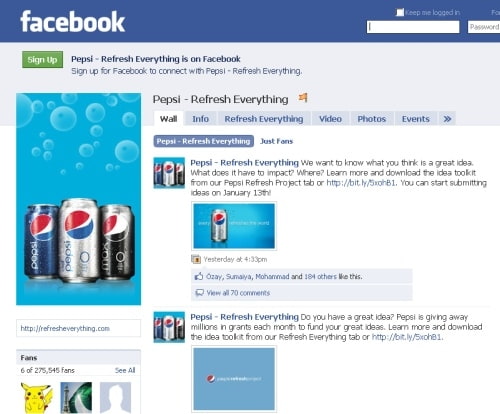 On the Facebook page is a link to find out more, which takes you to a Pepsi microsite. So now you’ve had two interactions with the brand. Say you go to the microsite, and watch the video on the homepage. That’s three interactions. Then maybe you decide to see what’s on the blog (four, if you’re still counting). Then you click on the small Twitter logo they provide to tell your followers about Pepsi’s campaign.

Not only have you quadrupled the number of interactions you would have had with this brand if you’d just watched a single three million dollar television commercial, you’ve just become a brand advocate—spreading the word for Pepsi at virtually no cost to them.

And the best part is, social media is the kind of advertising people want right now. So I guess so long Pepsi and your Super Bowl dominance, I’ll be seeing you online.