Obama girl died. The chalk lines are online. And you could be the next victim! 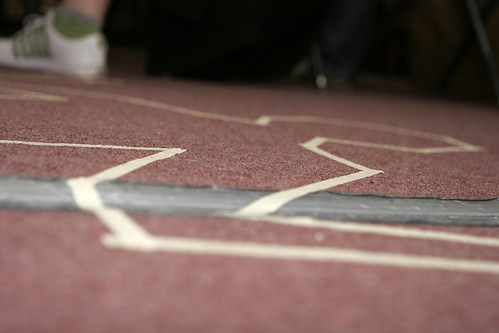 First, let’s back up for a moment and take stock. How did we get here and where are we going? How do we connect the dots?

In 2004 Robin Sloan and Matt Thompson gave us their vision of the future. In their futuristic vision, 2008 was marked by the revolutionary merger of Google and Amazon—giving birth to Googlezon.

The might behind Googlezon—user-controlled content—spawned a new life form online: EPIC, the Evolving Personalized Information Construct. News, search, and essentially all information online were automatically generated and tailored to individuals without the human element.

2009: Maybe we don’t have Googlezon, but we have come a long way in just five short years. Our online world is now powered by search engines and social media. The fears associated with the fabled Googlezon—the surge of user generated leading to online chaos, disinformation and the collapse of news media as we know it—aren’t too far off from today’s reality. That is, if you’re not around to mind the shop (online). Good business means listening to and taking charge of the the online buzz.

And what does this have to do with the death of Obama girl?

In summer 2007 Obama Girl went viral on YouTube (over a million views). In 2009, Obama Girl’s viral power is being leveraged to market the newest iteration of the teen horror-flick Final Destination. (Un)fortunately, this killed her. Meanwhile, we are waiting to see how this plays out at the box office this weekend.

But there are other viral videos—amateur videos—that receive upwards of thirty to forty million views on YouTube. This is believable when you consider that over 11 million unique visitors land on YouTube in a day. And what this boils down to: the majority of videos are ad free.

So the folks at YouTube realized this, too. And this is what I imagine led to YouTube’s decision to offer advertising on amateur viral videos: a couple YouTube co-workers were sharing a few pints of Guinness and someone said, “why don’t we capitalize on these viral videos?” The next person said, “Brilliant!” And that’s that.

Looking back, businesses and marketers know that there are two things that remain constant with regards to social media: change and growth. If you’re not on-board with social media, then your marketing plan might be the next casualty! Don’t get choked, stabbed or otherwise ruined by not being there. Social media can be a very friendly beast—when wrangled properly. Don’t be a victim! Download The “Pretty Good” Scenario Survival Guide: Social Media and get social, today!