Nike Powers Women to Be Better For It

On April 12, Nike launched #betterforit, an initiative to inspire women to be active, take on new challenges, and reach personal goals. The spot was created by Wieden + Kennedy and Nike says it’s their largest campaign yet to support and motivate women’s athletic journeys.

It’s about “powering [women] to be better through services, product innovation and athlete inspiration, motivating each other to push to the next level,” Nike says. I love it because of the messaging; which is unintimidating, relatable and funny!

In contrast to more aggressive Nike spots of the past, it’s a light, fun approach that seems to be resonating with the average athlete.

Nike sets the scene in the commercial with a newbie yogi, a struggling marathon runner, and a spin class full of models. You can hear what the women are thinking while working out, hilarious. They are struggling to get through their workouts but ultimately, will be #betterforit. They turn their can’ts into cans! I have thought all of those same thoughts at one point or another in my athletic life—and I appreciate the honesty that the commercial portrays.

I am all about uplifting women to lead healthier lifestyles and, frankly, empowering women in any way. I am one after all. So, I find those normal, everyday people in the commercial inspiring—you go girl!

Here is the full commercial—check it out!


Nike first aired it during the MTV Movie Awards and it seems that they are positioning it as a less aggressive (but maybe just as motivating) “Just Do I” campaign.

More Than Just a Hashtag

#betterforit is more than just a hashtag. It’s a call to action to share, promote and embrace women’s fitness and sports. With this rallying cry, Nike invites a global community of athletes to push themselves further, whether it’s a personal best in their latest marathon or a weekend run. #betterforit offers female athletes collective inspiration to reach new heights and a place to share their experience.

And as the commercial says, “If you’re brave enough to try, you’re strong enough to finish….” 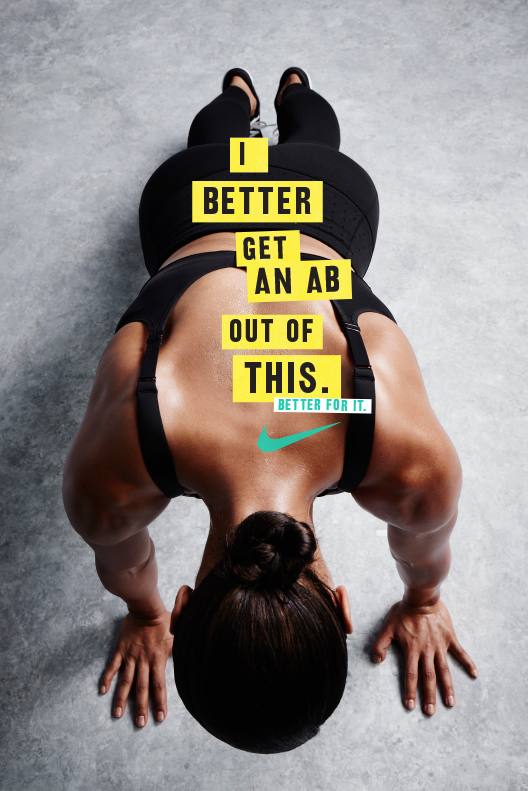