“C” is for Cookie, that’s Good Enough for Me

Taking behavioral-targeted advertising to new levels, some businesses’ ads are popping up where you would least expect them. They are now going above and beyond the typical age, race, sex, income, geographic, web history, purchase history, and social network targeting to serve up these new high tech customized ads.

The traditional “cookies” tracking methods are now just part of the targeting marketing mix in today’s digital world, as companies are constantly seeking out new means to reach their potential customers.

While it is argued that this online targeted approach is the only form of advertising that places 100% control in the consumers’ hands, as they can “opt out” at any time, many are worried about the level of personal information that is being shared and the invasion of privacy that goes with it. Will this ever-expanding super targeted advertising trend become the new line in the sand over white hat / black hat online advertising practices? 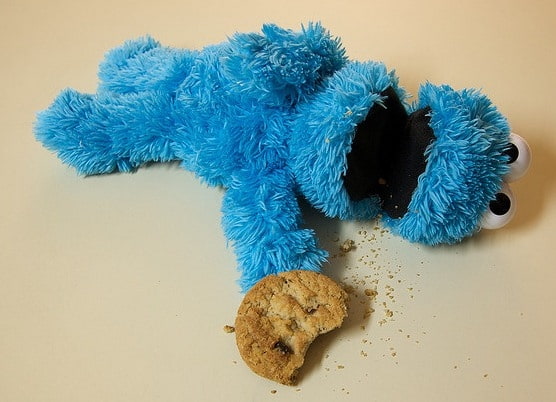 I read an interesting Washington Post article earlier this week about how some big brands, such as, McDonald’s and Macy’s have been testing ads that are being served on consumers’ online bank statements. As these online bankers checked their account statements, ads were displayed based upon the users’ previous transactions.

The software is said to be running on the banks’ servers, so that the personal data does not leave their secure networks, and the customers see these ads as being from a trusted source. The customers always have the option to “opt out” of the program, although only about 2% are doing so. The article stated that the click through rate of these ads was greater than 50% within the first month.

Another unique form of targeting that I recently learned about is how wireless carriers are using intercept campaigning to find new customers, or steal them from their competition.

They are serving these ads to certain models of certain devices on certain networks. The original technology behind it all is said to exist so that advertisers can determine what format of ad to show so that it fits best on the particular users’ mobile screen. But with this technology, carriers and service operators can also use this information to go after new market segments that haven’t yet made the upgrade to a smartphone, or target those nearing the end of their two-year contracts with their current subscribers.

For example, in November 2010, Nokia targeted their Nokia Twist smartphone at Motorola Razr users. As they navigated the internet on their Razrs, they would be served an ad suggesting “Are you still using a flip device?”, followed by links to upgrade to a Twist phone. Meanwhile, RIM used a little less aggressive approach, but used the same technology to target their own subscribers who were using older models of their BlackBerries, and enticing them with the newer models and features.

With the explosion of mobile devices and the ever growing social networking realm blended into the mix, the moving target is now also influenced by not only what you like, but also what your friends in your social network like. Real time social feeds are influencing consumers wherever they may be, thanks to there always on, and always with them, mobile devices. It is the new “keeping up with the Jones’”, as far as what’s hot and what’s not. Joe Jones likes his new Ford, so there’s a good chance that you might want one too. How about an enticing ad from your local Ford dealership to get you in a new ride and be just as cool as Joe?

The Federal Trade Commission has written up guidelines to address how and when companies should let their customers know who has access to their personal information. There is also talk of a coming “do not track registry,” similar to the “do not call registry,” offered to consumers to regulate telemarketing.

The FTC is also recommending a universal “do not track” feature as part of all internet browsers. Microsoft and Mozilla have announced that they will be including these features in their newest versions of their Internet Explorer and Firefox browsers.Senator John Kerry has also announced plans to introduce a new bill on online privacy.

With an ever increasing amount of “connected” devices, these behavioral targeted ads will soon have even more opportunities to reach potential consumers right at the critical decision making moments. What if my future connected refrigerator, like the new models from LG and Samsung, begin to tell me that I’m out of beer and prompts me with coupons for my favorite libations, or those of competitors, to get me to switch?

But I’d probably opt out of the ads when they begin to overwhelm me with the constant offers and reminders that I’m out of food in my bachelor fridge. But I’ll always have a stockpile of cookies in my cupboard.