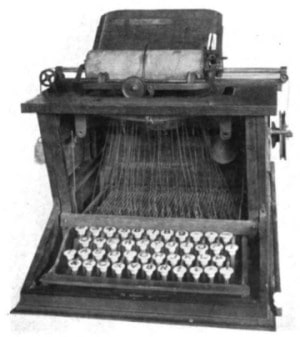 In 1868, a smart and imaginative fellow named Christopher Latham Sholes filed a patent for his new invention, the “typewriter.” The initial design had all of the keys arranged alphabetically, from top left to bottom right (the manner in which we westerners read). When a key was struck, the type bars swung up quickly to stamp the paper with ink, but would fall back slowly with gravity. However, after initial testing Sholes ran into a problem. The slow moving keys caused jams in the system when keys too close together were struck in quick succession. To combat this problem, he designed a keyboard layout that separated keys commonly used together.

The first typewriters were manufactured by Remington… yes, the weapons manufacturer (makes total sense, right?). The initial typewriters did not sell well, and it wasn’t until version two was released that it really caught on. Among other things, the type bars were improved dramatically, which actually solved the jamming problems of the first edition. Sholes offered more efficient keyboard layouts to the manufacturer, but due to great sales performance, they were unwilling to change the design. And as such, the QWERTY keyboard layout is now the standard in computer keyboards.

Fast forward about 30 years and meet Dr. August Dvorak. Dr. Dvorak was a professor of education and an educational psychologist at the University of Washington in Seattle. Through grants from the Carnegie Institute he sent out to change the old ways and create a keyboard layout based on logic and research. Dr. Dvorak extensively researched letters, digraphs (two successive letters used to represent a single sound) and words. He also studied professional typists and watched the way they typed to find efficiencies. After a year of research, Dr. Dvorak filed for a patent for his new keyboard design:

I know it looks confusing, but most of us have only known the QWERTY layout. This new keyboard design has been proven to be more efficient, easier to learn, and less stressful on fingers, hands, and wrists.

Hmm, that all sounds pretty sweet, so why aren’t we using Dvorak keyboards now?

Well, in short, it never caught on. Typewriter manufacturers were still reluctant to change such a successful product, and by now most of America knew the QWERTY layout very well. Typing schools and classes didn’t want to retrain their instructors. Dvorak even tried writing a book to promote his new idea, but it tanked and went out of print.

I’m sure that at this point most of you are asking yourselves, “Well John, how is this keyboard layout really better?” I’m so glad you asked:

What else can the Dvorak Keyboard do for you?

In 1982 the Dvorak Keyboard was finally adopted into the American National Standards Institute, nearly 40 years after its completion. Being recognized by A.N.S.I. has guaranteed that the Dvorak keyboard layout is now included in all computer operating systems, from OSX to Windows and even Linux. Instead of buying a new keyboard, there are several other options. You can be frugal (literally tape new letter locations on your existing keyboard) or invest a little cash (keyboard skins start at just $15).

It’s funny to think that we, supreme technological beings, are still using a conventional system that was designed in the late 1800s to solve a mechanical problem on an invention that is barely even used today.

It’s time to stop relying on all of the old standards and embrace true innovation. Break out of the mundane old and be bold!

I think I’m going to give it a try. What about you? What do you have to lose?