Oneupweb : Houston We Have a Revolution 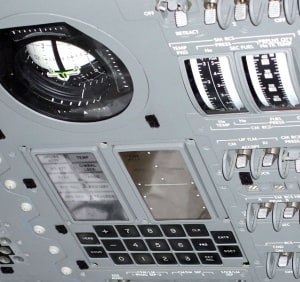 We have definitely advanced since the Apollo space module, which seems like raw technology today. We are led to believe that with a modern toaster, access to a decent scrap yard and MacGyver on the science team, we could have been planting that flag on Mars instead of the Moon. Personally, I don’t think Mac would have needed the toaster, but that’s a separate discussion altogether.

I did some research on the Apollo module computer and it’s pretty scary how weak it actually was. But what interests me, I mean what really keeps me geeked about tech in general, is how fast it changes.

Way back around 1965 (well, way back for most of you youngsters) a man named Gordon E. Moore  coined what has come to be known as Moore’s Law. This law describes a long-term trend in the history of computer technology; the number of transistors that can be placed inexpensively on a circuit board has doubled approximately every two years. Basically, computers get more powerful all the time at a really rapid rate, while the cost of them generally goes down. Well duh, right? Remember, Moore came up with this when a computer filled a room, debugging a computer meant actually looking for real bugs and “I got you babe” by Sonny and Cher was a number one hit.

You may think I’m rambling on a bit, but cut me some slack… I just donated blood, OK? The cool thing is that Moore’s theory is right; technology is constantly progressing. My cell phone can navigate its way to the moon and back. And if a cool song comes on my phone’s radio, I can tap a button and it will tell me the title, artist and what year it was a number one hit (if it was lucky to be one)…along with a link to Amazon.com, of course.

The power of the phone I use on a daily basis has impressed me to such a degree that I recently conducted a very strict, double-blind, peer-reviewed and publicly posted survey. In addition to the survey, I conducted a battery of experiments to help determine how we use our mobile “phones”.

In all honesty, I asked a bunch of friends and co-workers, put a few posts out on Aardvark and read posts on the subject. What I discovered was really interesting…at least to me. To most of you, my findings may not be a surprise, and although my hypothesis wasn’t far off, I still got that “wow” feeling when viewing the data.

Are you ready for the results of my “exhaustive” study?  Are you sitting down?

To a very large degree, people don’t use their phones… as phones. In my opinion, at this point they cease to actually be phones and are instead little super computers that can make calls.

My survey asked people to look at how they use their smart phone across six main areas. I asked the participants to estimate the percentage of use in each of the six categories. People from all over the globe participated, however most were from the U.S.

Here is how the average user from my quite limited poll uses their phone:

So…as far as I can tell, the top three uses for smart phones seem to be apps, texting and email. The way phones have evolved is a prime example of how technology changes all the time, and that’s why it interests me so much. Our mobile devices are becoming portable decision-making machines. They entertain us, guide us to our destinations, help us to find services and goods, and keep us connected with everything.

These changes provide both opportunities and challenges. They challenge us to think and conduct business in different ways. Change also provides us with new and engaging avenues to connect us with our interests. This is why businesses are flocking to get their own mobile apps out on the market. There is a revolution going on right now! Home computing is giving way to mobile computing.

If Moore’s law continues to hold true, in about five years, Apple will be rolling out the iSkinGraft with computational power of a hundred million Apollo space modules. When they do, contact us! I’d love to help you leverage the latest technology. In fact, why wait? There is plenty of technology we can help you with right now.