Oneupweb : I have a Dream…for Nike

I was recently reading a NewYorker.com column by one of my favorite authors, Malcolm Gladwell. The column was a question and answer chat back about social media. The whole article is interesting, but one question/answer really caught my attention:

WILLIAM CARLETON: Mr. Gladwell, the COO of Facebook and a Twitter exec both spoke at a marketing conference this week. In a way, they seem to be making your case for you, without much sense of irony. The description of the session led by the FB exec talks of “activism” as a brand promotion tool. Do you think part of why social media reinforces the status quo may be because the stewards of the most successful platforms seem to be selling them short?

MALCOLM GLADWELL: That’s hilarious. If the civil rights movement were taking place today, do you think that some corporate entity would see it as a brand opportunity as well? Would Dr. King have done Nike ads? But yes, I’m not sure Facebook does much for real activism when they treat it as just another app.

Gladwell’s answer, “If the civil rights movement were taking place today… Would Dr. King have done Nike ads?”, made me examine the morality of what he had just said. First I was appalled at the thought of a social and humanitarian hero being proselytized by consumerism. Until, I began to look at my own motivations as a consumer. I will purchase a more expensive box of cereal if it tells me that it is made from fair trade wheat and housed in a recycled craft paper box. But, did I just blend my consumer hunger with my moral hunger and eat it in one bite? 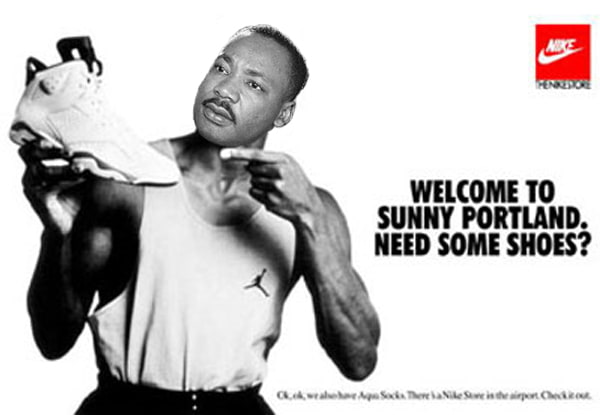 Does the “Red Campaign” shirt I bought at Gap make me more connected to the humanitarian plight of Africa than I would have been before? Or do the “TOMS Shoes” in my closet make me involved in the fight for a more sanitary environment for children?

So I ask the question now, would Dr. King have done Nike Ads? Could the millions of dollars in revenue, racial unification of an idea and a product, and international exposure have brought the civil rights movement to a more abrupt ending?