Do you know anyone who doesn’t like mac & cheese? It’s basically food treason to say you don’t. Growing up in my household, mac & cheese was a staple at the dinner table. However, my parents always tried to “dress it up” by adding polish sausage, bacon, or broccoli.

If you love mac & cheese and have a Twitter account, you may be in luck getting your paws on one of your favorite meals. KRAFT has been monitoring folks who have “mac & cheese” in their tweets with a promotion called “Mac & Jinx.” Here’s what they do:

Anytime two people individually publish a tweet with the phrase “mac & cheese,” KRAFT will simultaneously send those two a message. Whichever one clicks on the link and gives KRAFT their contact information first, wins free boxes of mac & cheese. 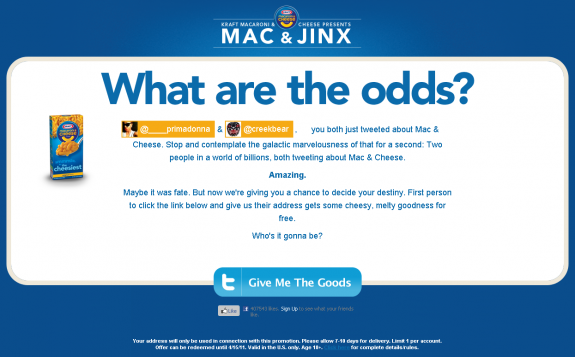 In the hopes of saving $1.49, I sent out the following tweet this morning, but I’ve heard nothing from KRAFT as of yet. I’ll be sure to post an update if I win!

Mac & Jinx is the brainchild of Crispin Porter + Bogusky. It’s a smart promotion, because not only is KRAFT gathering information about what people are saying about mac & cheese, they are incorporating a gaming aspect with the “jinx” portion of the promotion—two folks going head-to-head at the same time.

What do you think of Mac & Jinx? Will you be playing?