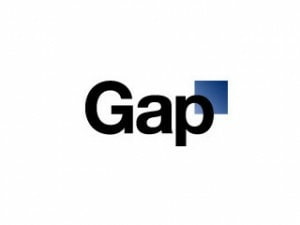 Last week, Gap showcased a new logo on its website and the response was—well, probably not as she expected.

Gap enthusiasts—for lack of a better term—really had something to say on social media sites like Facebook and Twitter regarding the new logo, most of which were not positive.

Because of the outpouring of negative response to the new logo, Gap thought it would be a good idea to conduct a crowd-sourcing project and asked folks to submit their own designs—that backfired, too. Below are a few examples: 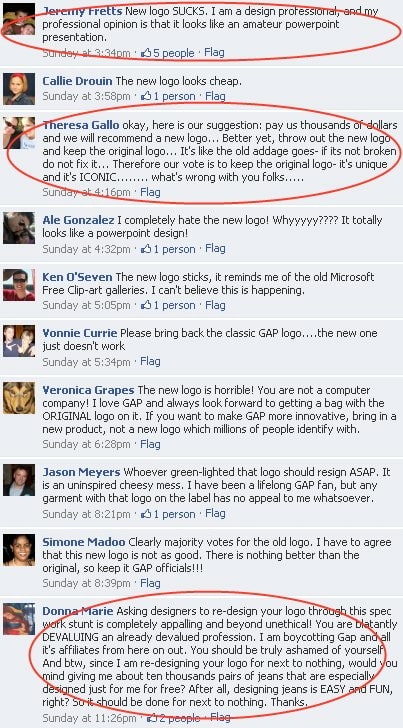 After that round of feedback, Gap then announced that it decided to stick its tail between its legs and return to the original blue box logo: 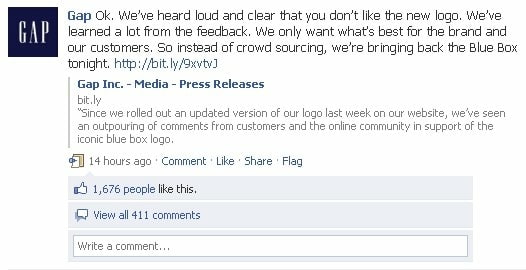 Hansen’s response to the feedback in the Gap, Inc. press release is apologetic. She writes:

We’ve learned a lot in this process. And we are clear that we did not go about this in the right way. We recognize that we missed the opportunity to engage with the online community.  This wasn’t the right project at the right time for crowd sourcing.

There may be a time to evolve our logo, but if and when that time comes, we’ll handle it in a different way.

Good gravy. Talk about being bulldozed by the Internet. That being said, this situation reminds me of a Robert Scoble quote that he referenced in a blog post after chatting with Mark Zuckerberg about frequently making Facebook users angry with consistent changes:

My former boss, Jim Fawcette, used to say that if you asked a group of Porsche owners what they wanted they’d tell you things like ‘smoother ride, more trunk space, more leg room, etc.” He’d then say “well, they just designed a Volvo.’ His words were meant to get us out of letting the customers run our business mode we often found ourselves falling into.

As social media continues to become more a part of our lifestyle, are businesses now letting customers rule business decisions via social networks? Gap sure seemed to.

As a social media manager, I am a huge advocate of engagement, communication and transparency. But I don’t think customers should rule major business decisions, unless of course, that was the intended goal.

What do you think of this Gap logo situation? I’m not asking about your opinion about the logo. Rather, how Gap handled the aftermath.