Twitter has released its long awaited ad platform. Since Twitter’s inception, many have wondered how the company would monetize the hugely popular service. Even comedian Steven Colbert said in an interview with Twitter co-founder Biz Stone,

”So, I assume that Biz in Biz Stone does not stand for business model.”

Twitter has chosen to begin the first phase of its ad platform by launching Promoted Tweets. According to Biz Stone,

“We are launching the first phase of our Promoted Tweets platform with a handful of innovative advertising partners that include Best Buy, Bravo, Red Bull, Sony Pictures, Starbucks, and Virgin America—with more to come. Promoted Tweets are ordinary Tweets that businesses and organizations want to highlight to a wider group of users.”

I’m not sure how paying for your Tweets to be displayed atop Twitter’s search results page is “ordinary”. It appears as if Biz Stone is going out of his way to define a new reality for users. This will be important as users (especially Twitter users) tend to be vocal, and if they feel wronged by the new ads—you better believe they’ll let the world know. 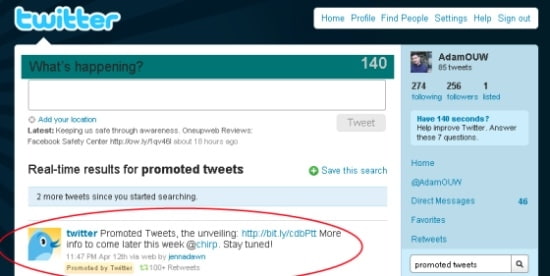 From the sounds of it, nothing with this new ad platform is set in stone. Biz Stone says,

The good folks at Twitter seem to understand that users aren’t accustom to ads, and because of this they will need to be rolled out slowly. Launching them in search results seems to be one of the least intrusive ways of doing this. If these adds are successful, we might see a similar model elsewhere.

As the proverbial ad water temperature rises on you Twitter users, how do you feel about Promoted Tweets and the possibility of more to come? Are you understanding of this addition, or do you feel it’s the end of Twitter as we know it?