There are many different definitions of virtualization. Cisco Systems, Inc. defines it as, “A method of making a physical entity act as multiple, independent logical entities.” VMware, Inc. defines virtualization as, “Running multiple virtual machines on a single physical machine, with each virtual machine sharing the resources of that one physical computer across multiple environments.”

Virtualization in the Information Technology industry has been around for many years. In the early days, it was usually associated with large corporations or data centers. Within the last five years, virtualization has become much more economical (free in some cases), and because of that, the technology is spreading to the masses.

You no longer need a “high-end” server or workstation to run multiple operating systems. For example, I have a base install of Window 7, 64-bit. From VMware Player (free) I run CentOS, Slackware, Windows XP and Windows Server 2003 (you will need to be properly licensed for the software you run). All of which are completely independent of one another. There are even “Virtual Appliances” which are pre-built virtual machines you can download and run. The only issue I have in a desktop environment is, if I need to restart my Windows 7 computer, I need to shut down all of my virtual machines first—in a server environment this is not a concern. 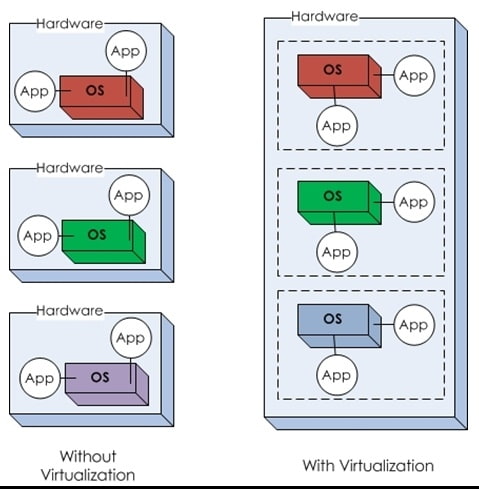 Recently there has been talk of expanding virtualization to mobile platforms (go figure). Imagine you wanted the “best” of all worlds; a RIMM Blackberry for email and messaging, a Motorola RAZR for calls and (of course) the Apple iPhone for mobile web browsing. Enter the era of “The Modular Mobile Phone”.

Olga Kharif of Business Week writes, “Currently, programmers have to rewrite every application—be it a game, social networking service, or other feature—for each of the various operating systems, including Symbian, Microsoft’s (MSFT) Windows Mobile, or Google’s (GOOG) Android. The tinkering can take months. But virtualization software would enable a mobile-phone maker to add features regardless of the operating system. So Motorola could grab a Web-browsing application written for one system, an e-mail application for another, and calling features designed for a third OS, and elegantly integrate them in one phone.”

What are your thoughts?