Hey, everybody, the Academy Awards are right around the corner! Whoooo! I can’t wait to see what Jennifer Aniston wears! Yee-hoooo! OMG, what if she runs into Brangelina!!! Oooooh, no you dih-ent! Hey, seriously though, I can’t wait to see The Dark Knight or Wall-E or Man on Wire win best picture, because they were the best films of 2008, and it makes sense that they’d win! Because they were the best pictures. Wait, what? Wall-E can’t be best picture because it’s animated? Man on Wire can’t be best picture because it’s a documentary? The Dark Knight isn’t even nominated? Well, heck, isn’t that a dilly of a pickle? ZOMG, but what if Jen has to present Brad an award for being a creepy old baby? Oooooooh!

I love movies, but I don’t love the Academy Awards. I don’t even like them. I don’t like the Academy. I don’t like a bunch of anonymous industry dinosaurs telling everyone what movie they thought was the best movie of the year. For me, their track record speaks for itself. I despised The Titanic. I couldn’t even watch Forrest Gump (I actually threw the video across the room after ejecting it, with my boot, during the part where Li’l Forrest teaches Elvis how to dance). The ceremony itself is a poorly-coordinated series of interminable, self-congratulatory speeches only occasionally punctuated by unfunny jokes and embarrassing musical performances. And who cares who wore what dress? Seriously? I’m sure I can read about it in Us or People later, when I’m at the dentist’s office. But, shucks, enough about me. What am I gonna do about it, is what you’re asking. Besides whining? Like a giant baby?

One of my favorite movie-related sites is RottenTomatoes.com. 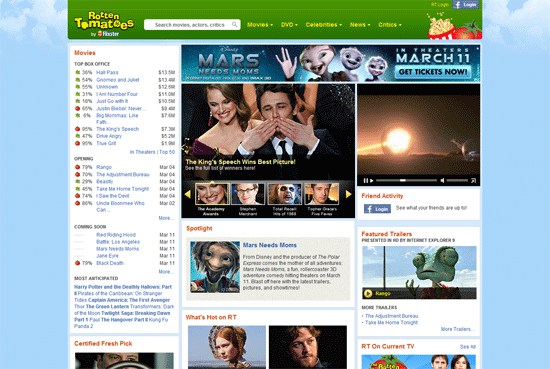 I can typically rely on the ratings, because the Tomatometer compiles reviews from many different sources, so if your favorite critic woke up on the stupid side of the bed and gave Marley and Me four stars, he or she will be drowned out by a sea of more competent voices. Inclusion is, from what I can tell, based on a near-perfect democratic process: reviews by, say, Richard Roeper are given the same weight as those by all those people (and they are legion) you’ve never heard of. The movies are rated on a percentage of how many “fresh” (good) or “rotten” (sucktastic) reviews they’ve received. Go there, cinephiles. You won’t regret it.

What I’d never looked into, though, is whether I could use RottenTomatoes.com as more than just a ratings tool, as a digital soap box to espouse my jaded views and, perchance, find like minded folks out there who also feel that the Academy would be one of the things we wouldn’t miss should California finally fall into the ocean. And who just want to talk about movies we love, while not hearing about how “great” Tom Hanks or Robin Williams are in their latest cinematic atrocities.

(By the way, if you like Tom Hanks (who I actually liked in Road to Perdition) or Robin Williams (I got nothin’), please don’t take offense. Keep liking them. You’re in the majority. I’m the freak, here.)

And there it is: The Vine. 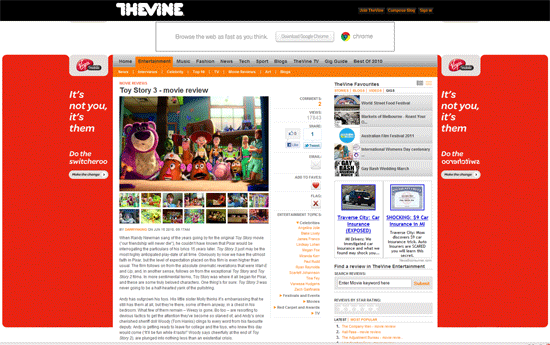 Not only can I start a journal (“The Aching Fist”), but I can start my own group (“The People’s Academy”). I can post my own reviews. I can reach out to other freakish film buffs and talk smack about Julia Roberts. We can simultaneously discuss the relative merits of both Why Does Herr R Run Amok? and Making the Grade.

We can give our own damn awards for Best Picture, Best Upstaging by a Monkey, Best Spit Take, Best Open-Hand B-Slap, Worst Special Effects, Least Realistic CGI, whatever we want. We can create a manifesto that calls for the death of movies based on TV shows and/or starring Adam Sandler. When I’m ready, and when I’ve moved in a little bit (get a picture put up, etc.), I can auto-invite 20 friends to join in. And get the ball (or, in this case, tomato) rolling.

Thank you, RottenTomatoes.com, for providing a venue, and for making it so darn simple. And all I have to suffer through is a few banner ads. Which I can complain about in my journal. Ha!

I give The Vine community a rating of 99.99% fresh, and I’ve done very little. I’ve only just begun. My group and journal are mere shells right now, empty vessels. Tabulas rasa. But I’m single, live in the goondocks, am a dork, and have started to intensely dislike Facebook. I’d imagine it’ll fill up pretty quick.

PS: Blatant hint – the Vine features a fairly robust search function, that you could maybe, if you want, use to find my journal. Or my group. If you want.