Many people like reading blogs; it’s a scientific fact. Look at you right now—you’re reading a blog. See? Fact. The incorporation of new media in everyday life, including the use of social networking sites, is gaining momentum, a giant boulder of communication and display tumbling down the hill of the internet.

“What’s that?” I hear you ask, “That is poppycock and balderdash! Only high-schoolers and lazy college folk use those new-fangled interweb sites! I’ve never even seen a camera phone! Where’s my rotary telephonic device?” (Okay, so that’s a bit of hyperbole, but bear with me.) Well then, do I have a surprise for you: not only do those youthful persons participate in new media, but a vast majority of everyone else is using them as well. This includes (are you ready?) Presidential candidates Barack Obama and John McCain! 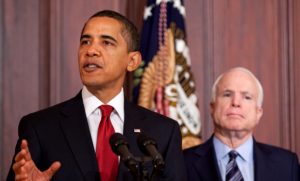 I recently performed several searches to track down the social media sites that these fellows are participating in. It turns out that both gentlemen have Twitter, LinkedIn, YouTube, Flickr and Facebook accounts, which makes perfect sense considering how these are the predominant social sites.

The main difference between the two, however, lies in the fact that Obama also has a designated Flickr site and a Twitter, while McCain does not… yet. Regardless, each social network allows the candidates to share agendas, thoughts and updated campaign reports directly with their followers… and with anyone else who may end up voting for them.

It’s encouraging to see such a large embrace of new media during this election, and only leaves one to wonder how things will be during the next one.

And speaking of Twitter and politics, did anyone follow Representative John Culberson’s Twittercast last Friday? When Congress adjourned for their month-long vacation, they were dismissed before a vote could be cast, and this angered the Republicans. Soon many were on the floor, sans lights or microphones, giving impromptu speeches and calling tourists and others into the gallery. During this whole event Rep. Culberson kept updating his Twitter account, giving a live play-by-play for the whole thing, and even using his Blackberry to take live video and stream it via Qik. The buzz has been great for such a novel concept.

I highly recommend observing the impact new media has had on the political system; it’s absolutely fascinating how these mediums can be used by politicians to promote their political ideals and even to just show the audience that they are normal people, too. Normal people with MySpace accounts.

Memo to Hillary and Barack: YouTube Is a Two-Headed Beast

McCain Buys Hillary. Mitt Buys A Bunch. Others By Stand.