Semantic Search: Boldly Going Where No Search Engine Has Gone Before

LCARS (Library Computer Access/Retrieval System) is an advanced computer operating system on the hit TV series, Star Trek: The Next Generation. Unlike the computers of today, LCARS is able to interact with the crew of the Enterprise in a conversational manner, provide answers to complex queries and anticipate Captain Picard’s needs.

While much of the technology featured on the show can be written off as science-fiction, recent advancements in search have brought this 24th century technology within our reach. With algorithmic updates like Hummingbird (released in August of 2013) and the increased integration of Knowledge Graph (introduced in May of 2012), Google has made huge leaps towards making this futuristic technology a modern reality.

At the core of this functionality is Google’s improved ability to understand and store “entities.” These are the people, places and concepts that make up the underlying meaning of a web page. It is becoming increasingly common to see results for queries about people, places and media objects that look like this: 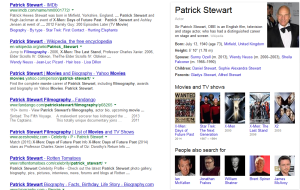 In the above example, Google’s Knowledge Graph is able to identify that the user is interested in “Patrick Stewart.” Google is able to understand this entity and provide additional information, like when/where he was born and movies/TV shows he has starred in, directly within the search results of the original query because it knows that users who search for “Patrick Stewart” frequently search for this information as well.

While Google’s algorithm is years away from achieving the level of functionality of the fictional LCARS, the end of the “traditional” 10 blue link SERPs (Search Engine Results Pages) of today is close at hand. Google will continue to shift toward more media-oriented, interactive results. Despite these changes, traditional SEO best practices will continue to be important, while a holistic search marketing strategy has become the best means of ranking well in SERPs and attracting the desired traffic to your website.