Once every year or so, I get my turn at writing a blog entry for StraightUpSearch. As System Administrator here at Oneupweb, the feeling of writing my entry is similar to the feeling that comes over me just before a dentist appointment. It’s almost as painful as well. It’s not because I don’t care, or that I have nothing to say. It’s just that most of the things I would say should not be in writing, anywhere. That said, I’m told I did write the 6th most popular StraightUpSearch blog post last year. How’s that for irony? 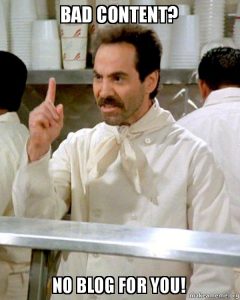 I have never cared much for listening to other people’s opinions about what they think I should or should not do. So, why then, would I want to read about those same opinions? After all, that’s what I think a blog basically is. If it were based on simple facts that said, “Hey, this is how you have to do it to make it work,” then it would be called a manual or a white paper.

Think about how many blog posts you read on any given day or week. Do you just read the posts or the comments as well? How much time do you spend on this each day/week?

I think people often make the mistake of interpreting blog opinions as fact and base their decisions on that. Much like the way politics work. (Don’t worry, I won’t get into politics here. We all know that politicians are good, honest people. Just read their blogs, they’ll tell you.) I just mean that when people hear things enough times (probably from the same source), they sometimes start to take on the same opinion. I have always found that getting to the facts and looking at multiple sources is a much better approach.

In my opinion, the best online communications tool out there is a forum. Forums allow users of a certain product or service to voice their success/failures with said product or service. You will find that company representatives will often comment on the topic as well. I know when I am looking to purchase new software or hardware, the forums play a big part for me.

I know that my opinion of blogs doesn’t mean much. I just want to get you to think a little bit about what you’re reading and who it’s coming from. Look around a bit and see if that blog author’s opinion is backed up with facts from different sources. After all, in this age of information you have the power, and the diversity of selection, to choose what you want to believe.