Thoughts On The iPad, Flash And Online Video 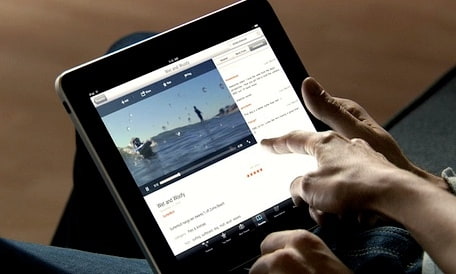 Ah yes, the iPad. Shrouded in secrecy until its recent unveiling, this newest gadget from Apple was the subject of nigh rabid speculation regarding its features, form factor and name. Post-launch, the product is still being hotly discussed, but one feature in particular (or lack thereof) seems to have grabbed quite a bit of attention: no native support for Adobe Flash.

This is nothing new for Apple. The iPhone and iPod Touch have lacked any support for Flash since coming to market, relying on custom apps to allow access to content on sites like YouTube (which ordinarily streams content as Flash video files). As described in an earlier post on this blog, Adobe has once again found themselves with the ball in their court. I wouldn’t be surprised if Adobe Flash Professional CS5 winds up able to compile apps for both the iPhone and the iPad. Or who knows, maybe that’s a CS6 feature?

But why take such a hard line against Flash with the iPad? First, Apple has been consistent in its position that Flash is too resource intensive for its mobile devices, citing decreased battery life and processor strain as the two primary examples of why it could be considered advantageous to drop support altogether. Secondly, Apple is pushing standards with the launch of this device—HTML5 specifically.

By supporting HTML5, Apple has enabled the iPad to stream video content without the need for a browser plugin. Most mainstream video content providers, including YouTube, are already moving to adopt HTML5. Currently, web browsers Opera and (unsurprisingly) Apple’s own Safari boast strong support of HTML5, while Microsoft’s own Internet Explorer lags far behind.

It would be unwise to take all of this as reason to be dismissive of Flash altogether, however. Roughly 96 percent of internet users have some version of Adobe’s Flash installed on their computers. While HTML5 may be the future of video distribution on the web, Flash developers continue to push the platform’s boundaries, delivering not only video, but games, advertising and interactive media to a steadily growing global market.

We may be just catching a glimpse of the end of Adobe’s market dominance on the horizon, but in the meantime, it’s still the 800 pound gorilla in the room when it comes to the multimedia content being consumed by the one billion plus global internet users online in 2010. Apple’s decision to essentially “lock out” its iPad users from this type of content may have been intended to be a push toward the future, but could wind up hurting them in the end.

Pushing standards is one thing, but denying people access to content they have become widely accustomed to consuming is another thing entirely.