Tigers and Golf Clubs and Trees, Oh My!

Ironic Facebook post of the year—October 14th, 2009: “I’m often asked why people don’t often see me and Elin in gossip magazines or tabloids. I think we’ve avoided a lot of media attention because we’re kind of boring …” -Tiger Woods

The recent imbroglio starring Tiger Woods, his wife, his golf clubs, his car and a tree in his neighbor’s yard would, were he a typical person, be very few people’s business. His family, his neighbors and the cops. Eventually a mechanic. Potentially a marriage counselor and/or divorce lawyer, but that’s it. Trouble is, Tiger Woods is a celebrity. And a celebrity who’s seemingly prided himself on being “boring.” A nice family guy who sometimes swears when he misses putts, but that’s about it. An inspiration, with a billion dollars in sponsorships and his own logo, who, until a couple days ago, enjoyed an enviably sterling reputation. 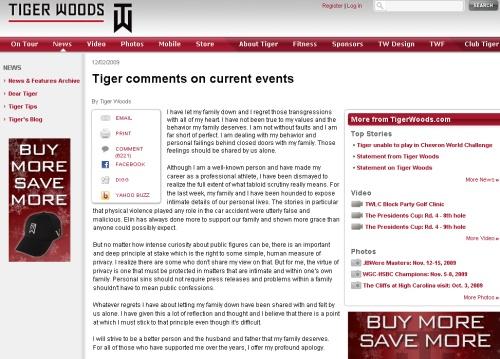 Beyond being a celebrity “offline” (Is there such a thing anymore?), Tiger has not, until recently, shied away from maintaining an online presence. Besides the aforementioned Facebook HQ, he has his own impressively robust website: www.TigerWoods.com. No way he keeps all that going on his own, but he does occasionally respond to fan letters and he blogs with relative regularity. The comments to Tiger’s last blog post, which mentions nothing about this incident (and couldn’t, as it was written in the halcyon days of early October), are so full of goodwill, support and best wishes you’d think he was freaking Santa Claus. Even a cynic as burnt up and bitter as I can’t read them without thinking, “Awwwwww!” I swear, my heart grew three sizes this morning.

Unfortunately, while leaving those folks hanging, Tiger issued an imperative but somewhat anemic statement about the incident saying, essentially, “Whoops!” and “Leave us alone.” The reaction, as one could imagine, is mixed. He absolutely has his hardcore fans who darn the heck out of the media (they sure seem to be a well-mannered group) and advise him to hang in there, but there are a certain number of detractors as well. The anti-affair contingent is in full force (funny, their comments haven’t generated too many pro-affair responses), and there are a couple “My kids look up to you, Man” and “Don’t let us down” type pleas. My guess is that, as the clock ticks, the latter will increase in volume while the former begin to doubt their hero.

Once you’ve developed an online presence, it’s there. You’ve begun the conversation. You’ve maintained the conversation. Like it or not, you can’t just stop. Silence only creates more questions. In addition, there’s no way that darn media is going to shut up. TMZ still tries to shock us with Lindsay Lohan, for Pete’s sake you know they’re not going to let up once they have Tiger by the tail. (My apologies.)

Some conversations are uncomfortable. Some you’d much rather avoid. But when you suddenly stop talking, other people are going to fill in the blanks. In order to maintain your online reputation, you’re going to have to respond. Shakespeare said it: “Truth will out.” The advantage to having an online presence is that you can control how truth, um, outs. The best case scenario is, if you made a mistake, admit it. Apologize to your fans. Silence your detractors—what can they say after you say either “Yeah, I did it, and I’m sorry” or “Nope, you’re wrong, and here’s the proof?” Follow the motto Oneupweb has followed since our inception: Be humble, honest, and professional. (The latter is key—this is a situation in which one could easily over-share. I’d recommend you consult with your friendly online reputation professional to develop, among other things, a go-to list of red flag topics.)

The public persona is never the whole person, but you can’t deny its existence. Your online conversations provide a perfect venue for thoughtful response. Don’t abandon them.

The age of keeping a secret is dead. And silence, in this case, isn’t the answer.