The captains of print industry, with no clear grasp on Web 2.0, have recently seized the one name they know: Google. And they have laid all the blame for the downfall of their glorious profession on the Mountain View based search engine.

Google for stealing their content and re-posting it without permission.
Google for taking their words and profiting from them like an evil land baron.

Maureen Dowd of the NY Times embodies this curmudgeonly and suspicious attitude towards Google in a recent Op-Ed article. Her tone and attitude makes me as a reader, and as a writer, cringe. She claims Google, and just Google alone, not the millions of bloggers, news aggregators or failed business models, has “hijacked journalism”. Her sarcastic first question to Eric Schmidt segways into a petulant demand for Google to “just write us a big check for using our stories”, then proceeds to miss the point entirely as Schmidt explains how newspapers could better use targeted ads in their own stories. And Maureen, it’s battle royale, sweetheart. Not royal.

So why are people such as Ms. Dowd ignoring one big fact? As TechCrunch points out, and most of you know, Yahoo News is actually a more visited news aggregator than Google. By 3 times as much. The NY Times and its properties draws even more traffic than Yahoo. We’re talking millions more.

So why not go after Yahoo? They’re a search engine too, right?

Because Yahoo doesn’t have nearly as much money as Google. These publishers really don’t want Google to stop using their content. They just want their cut of the cash from Google’s ads. So as one hand acts defiant and appalled at Google’s behavior, the other plays nice, pleads to be partners and asks for a piece of the pie. There’s a saying for that: “You can’t have your cake and eat it too.”

And there’s a point about traffic people such as the A.P. and Rupert Murdoch (who’s said he will no longer allow Google to “steal our copyrights”) don’t get. And the point is this: Traffic is good. Links are great. Ranking well in Google is awesome.

So, instead of fixing their outdated and obviously busted business model, these news publishers are looking for a handout, for someone else, Google, to do the work for them. For example, the A.P. doesn’t really have a home page you’d expect a respected news source to have, and as WebProNews points out, none are using social media as well as they should to drive traffic, and therefore, revenue.

And I’ve never taken business classes, but I’m pretty sure they teach you on day one that if you don’t know how to turn a profit on your own, you’re screwed. Time’s are changing, print media. Either change with them or get left in the dust.

So keep your ear to the ground, SEM world. If the A.P. got their way, using a snippet or linking to one of their articles could get you sued &mdash bloggers and online journalists alike. And if these traditional publishers keep making demands of Google, Google has a couple of choices &mdash cave or flex its muscle and delist them all, removing immediate sources of information for all users from its index.

Their attitude makes a claim of superiority to any other form of news or source of news. But as Erick Schonfeld of TechCrunch points out,

“If you want to be known as an authoritative source of news, it is no longer good enough to simply proclaim yourself to be one.” 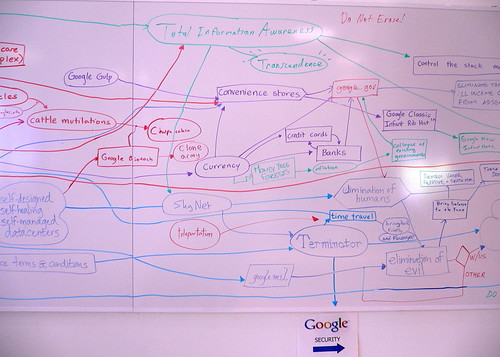