Earlier this week, Twitter announced its “State of Twitter Spam,” outlining efforts made to reduce the large amounts of spammy tweets made on the microblogging platform to a meager 1%. 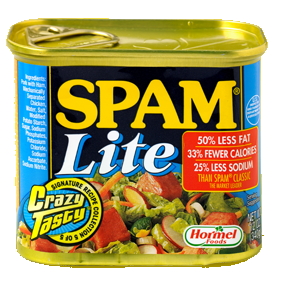 Although Twitter does not go into detail about how they reduced the spammy accounts and tweets, Twitter’s Abdur Chowdhury stated:

“With help from engineers on our Research team like @wfarner, we’ve moved the percentage of spam flowing through the Twitter network way down—and counting.”

Twitter now seems to be on a diet of SPAM® Lite – half the crap and nearly 33% less bull.