There’s a lot of chatter going on about this move as it has long been a highly debated indicator of how well a site can rank in Google SERPs. Google has said for a while now that webmasters shouldn’t worry about PageRank, but up until now, they’ve somewhat contradicted themselves as they’ve continued to display it as a seemingly important metric.

But not anymore. This contradiction has finally been realized, and much of the buzz surrounding this topic has been positive, with many praising Google for making this move. There are others, though, that still feel Google places significant value on PageRank, arguing that if it is in fact a meaningless metric, they’d get rid of it completely—including removal from the Google Toolbar. 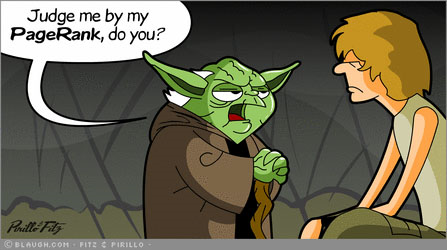 So is it true? Does Google use PageRank as a factor in determining where a site/page will rank? Well sure—they come right out and say it. They also say, however, that it’s only one of over 200 factors they weigh.

Their reason for removing it from Webmaster Tools is that webmasters, site owners, and SEOs often focus too heavily on this one metric. Can you really blame them, though? It’s been one of the clearest and most visible signals of the perceived value of a site/page in the eyes of the top search engine in the world. An engine that closely guards the way in which it ranks sites/pages, and an engine which can heavily influence the bottom line of virtually any business.

So then what should PageRank be used for?

Well, why don’t we start with what it should NOT be used for. PageRank should not be an indicator of SEO success. In fact, if I were a site owner that was paying an outside vendor to improve my organic visibility, I would care less about PageRank. Instead, I’d be focused on whether or not my underlying objectives were being hit, either relative to traffic (branding), site conversions, sales, ROI, etc., and that they were being achieved through best practices.

Getting back to my original question (what can it be used for?), PageRank can at times be used as a means to help influence short-term SEO strategies. While, according to Google, there are over 500 million variables that are considered when determining PageRank, one important variable is link strength. And as link strength correlates with site authority, PageRank can provide a level of insight which can be used as a starting point to help solidify targeted search engine real estate.

I’m not saying to only think short-term. As with any marketing initiative, it’s important to look at the bigger picture and put pieces into place which account for long-term objectives. Instead, what I am saying is that there’s only so much room at the top, and that a site which isn’t currently seen as authoritative in the eyes of Google should produce SEO strategies which account for both short and long-term results.

At times, this metric can provide some meaningful insight. But overall, PageRank doesn’t offer nearly the level of insight which can be garnered by doing some actual digging and analysis. All in all, this move reminds me of when Google decided to remove the “supplemental results” label in SERPs over two years ago. Does it mean they immediately stopped placing pages in their supplemental index? Absolutely not.

PageRank is a big attention-grabber more than anything else, and similar to Google’s decision to pull the supplemental results tag, it’s all of this attention that’s ultimately brought about this decision.