You’re So Vain, You Probably Think This Post Is About You

Admit it. You’ve done it. The vanity search. I mean, come on – who wouldn’t? Search engines are powerful tools, and we, as inveterate naval-gazers, when presented with tools that claim access to a huge portion of the world’s information, well, we want to know what they know about us. We want to exist, in there.

On the other hand, maybe we don’t.

I have a name that’s, well, common. A lot of people have my same name. Evidence – when I was in high school, I would repeatedly be called out of class and sent to the campus police office. When there, the campus police officer (who shall remain nameless but who, trust me, was a humungous jerk plus kind of stupid), would stare at me, waiting for me to crack. Waiting for my facade of innocence to fall like the house of cards he knew it was. (Remember, this happened multiple times. The same way.) When it didn’t, he’d shove some piece of evidence toward me and say “explain that.” On one occasion, halfway through 12th grade, it was a gym bag containing size small gym shorts (by my senior year I was no longer a size small, nor was I in gym class), a size small shirt, size 7 1/2 shoes (I’ve worn size ten since ninth grade), some eighth grade textbooks, and apparently, a big bag full of weed. My name was written (poorly, I might add) on the tag. Explain that. “Well, I’m a senior. Would you like me to try on that tiny shirt? You think those shoes fit me?  Would you like to see my math book? I’ll get it, it’s on my desk in the senior-level math class you just pulled me out of. Why, Mr. Policeman, do you keep thinking this kid is me?”

Well, yes and no. It’s my name, but that drug kid has it too. So do like six other people at this school. Throw a rock, Einstein, and you’ll probably hit one. In fact, your last name is the same as my first name. How do I know this isn’t your gym bag? Explain that, Dick Tracy.

Anyway, he always let me go with a warning (for what I’ve never figured out – “make sure that kid with your name stops hauling around huge bags of pot and then leaving them on the bus”? I’ll get right on that, Magnum PI). I learned my lesson.

Back to the interweb – a search for my name brings up multiple doctors and lawyers (please don’t tell my mom about that, though – she’s suffered enough), a minor league baseball player, a guy who worked in the art department for “Jurassic Park,” and a children’s book author who actually changed his name to mine (!?!?!), along with some guy who killed his mother (see, mom?  It could be worse…) and a couple dead guys. If I cared, I’d be a bit disturbed that I’m not represented in this landscape. That I don’t have a presence in that real estate.

That I’m not there.

I don’t care that my name brings up a bunch of people who aren’t me. I’ve not tried to brand myself, and if I did, it wouldn’t be with my name. (I’m tossing around “World Impakt!!!” and “2 Fly 2 Die,” but I’m not married to them.) If I had, however, I’d want to be damn sure that I not only showed up in search results, but I dominated them. If there was something negative about me in there, I’d want to address it. 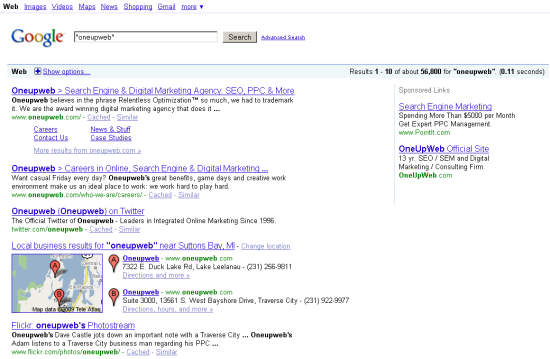 Boom. There we are. Continuing to occupy that space isn’t easy, but we’ve decided that our brand is important enough to devote that level of attention to. We’re digital marketers, and when someone hears our name, and searches it, we need to be there, in force. Representing.

And, if your brand’s important enough, we can help you with that.