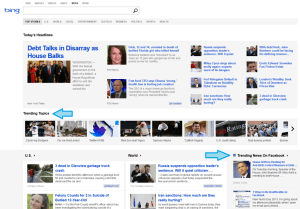 Bing has added trending topics from Facebook and Twitter to their newly redesigned news portal. Here’s a look at the new Bing News: The design features a prominent Trending Topics carousel, which draws from both Facebook and Twitter. As you can see in the above screenshot, there’s also a column on the bottom right titled […]

In an effort to improve landing page quality and provide up-to-date product information, Bing in late August announced Rich Captions and Product Search ads, which launched in beta in late September to limited advertisers. Both are visible on the Search Engine Results Page, however, and these ads will integrate all search functions instead of having […]

Perhaps not coincidentally to the new logo released by Yahoo! last month, Bing and Google also released updated logos. Bing’s new logo brings the search engine aesthetically in line with other major Microsoft properties by reflecting the “Metro” design style that Microsoft has been implementing since the release of Windows 8. We predict this logo […]