4 Things Coaching Taught Me About Operations

Anyone who has had to work with me for more than about a week, knows that I have a special place in my heart for metaphors and analogies. So when the crew asked me to compare my role as Director of Operations to my years as a coach, I was pretty sure this was some sort of sly prank. I’ve been assured though, that this is all on the up and up.

Which is great for me, because the truth is, there is a lot that football can teach us, once we get past the very basic; block & tackle, run & catch.

Probably the most obvious piece of the equation, but when coaching a football player, you have to teach them the position they will play. They are one of 11 on the field. And while a good team can appear to be moving as one, it’s more akin symphony of instruments than it is to a single machine.

Each player has notes to play and beats to hit them on. At times, many instruments can play a similar part in support of a solo, but every instrument is critical to the music and it will never sound as good if one player misses a note – sometimes disastrously.

Similarly, within an organization, so many layers of operation are inter-dependent. Therefore, it’s crucial that each team-member really understand the role they play in the overall objective. The degree to which they are a virtuoso musician, or all-pro player will vary based on experience, talent, and execution, but the fundamentals are the same from a High School Freshmen to a Super Bowl winning veteran.

This is what starts to separate average teams from great. As you build up the layers in teams and players, you start to see truly magical play when players understand what is asked of one another.

Once the linemen understands what the Quarterback is responsible for on the play, they can start to adjust to better support that. It’s a simple, but critical progression. The lineman can assess how his own responsibilities need to be addressed, but if the Defense has presented a new challenge, the lineman can adjust from his core duty just enough to allow the QB to operate.  These unspoken, small, but critical changes can mark the difference between a sack and a touchdown.

It’s the same at the office. Within a complex project, everyone has a part of the job to take care of. If someone early in the project can see there might be a challenge for someone else further on (e.g.; maybe the copywriter can see where design will have a challenge with layout), he or she can adjust what they are doing to support the workflow further down the line. That kind of forward thinking early, gives the team tasked with later responsibility the chance to shine, instead of having to clean up a mess at the finish line.

Even as a fan, I’ll be one of the first to tell you that football is FULL of tired old clichés. If a coach or player truly said anything original, heartfelt, or insightful in an interview, AM radio and cable sports channels might very well spontaneously combust.

Let’s not forget though, clichés (no matter how trite or worn out they might be) are born of truth.

There is probably no better example of that than the old adage, “football is a game of inches”. I’m sure it’s been said by Bear Bryant, Paul Brown, Vince Lombardi, Tom Landry, and on and on. 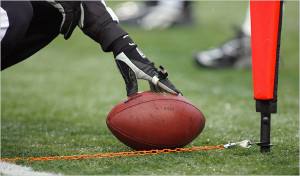 The thread of truth there, is that over and over I’ve seen that it’s not the colossal, drive into the guard-rails, light-the-fuel-barrel on fire mistakes that take you down. That’s just human error. What will ultimately do you in – and it’s death by 1,000 paper cuts – is losing site of the little things. Small, minute details that get overlooked will do more to undermine you than anything else.

It’s akin to sloppy play on the field. Sure, the tackle moved the right way, and he was in his zone, but his footwork was bad and his hands were too far outside. Instead of a cutback lane, the running back was dumped in the backfield and the stadium has to endure the terror of a 340 lbs. behemoth doing a pseudo sack-dance. (Some images never go away)

On the flip side though, if everyone pays attention to the little things; toes in, thumbs up, head on the left – big things can happen as a result.

One of the big lessons for a football team is that no one person needs to be a hero, but everyone needs to take care of their one responsibility flawlessly, then the team will win.

Plan to execute, but prepare to react

“everybody has a plan ‘til they get punched in the mouth.”

Truer words are seldom said – even if the source is a little unexpected.

It’s as true in business as it is in sports. You can have spent countless hours building a game plan and laying out a strategy. You can draw on all your past experience and everything you’ve learned about the other team, to try and plan around their strength and weaknesses.

But when they run back the opening kickoff and your running back blows up his knee on the second play from scrimmage, all those plans you set down can go right out the window. Now it’s about fundamentals. When the game turns sideways, you have to get back to basics. What do you know and what can you do well? Apply, execute, repeat. It may not be the virtuoso game you were planning on, but if you’ve built the base well enough, you’ll get yourself out of the deep end.

The only time you can do this is when you know your team understands the basic, core elements of their position (or job). They have to be automatic at the basics. If they’ve got that, it’s your job as the coach (or Manager, or Director) to instill confidence in them that they will get out of a sticky spot. Then using the skills your team has, put them in a position to succeed. Don’t ask them to call the plays, just ask them to trust in your play-calls and execute.