SOPA and PIPA Update: Congress has delayed consideration of the PIPA and SOPA bills, which – if enacted – would censor the Web and impose harmful regulations on American business. Congratulations to all who took a stand and to all who signed the petitions that had been going around, including Google’s petition, in which we supported.

Google’s inbox message this morning to us for supporting the #AntiSOPA and #AntiPIPA stand. 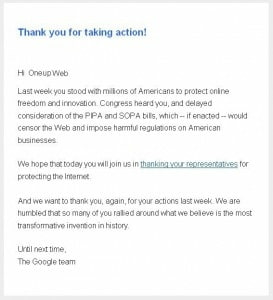 On the SOPA/PIPA blackout day, January 18th, 2012, Oneupweb participated by representing via their homepage. 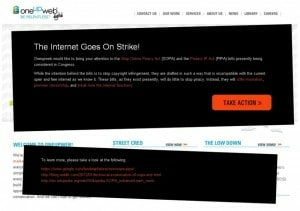