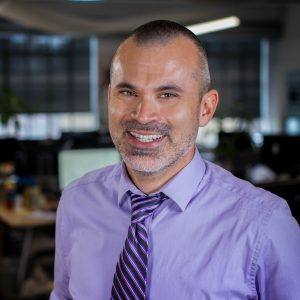 Most of the day is spent in Adobe After Effects, Premiere and Flash, making the beautiful things that the designers create, move.

When the “What Is Reference Right” video we did for client Human Systems Development’s won a Silver Davey Award for Animation.

Collaborating on videos with people from different departments that you normally don’t get a chance to work with.

What’s your favorite blog and why?

I’ve got a few favorites:

The summers. They are amazing up here.

Your Favorite things to do in Traverse City.

Exploring the trails around the area and around the Sleeping Bear Dunes, and watching movies at the State Theater.

Oh, this is tough. So many great places to eat. If I have to pick, I’d say it’s a three-way tie between Georgina’s, PepeNero and The Towne Plaza.

My all-time favorite: The Office (US version). Current favorite: Game of Thrones and Walking Dead.

Do you want to know what else makes Rob move? Email him directly at rvanderstelt@oneupweb.com.

How to Stay Connected When Working Remotely
How to Stay Sane and Productive While Working From Home: A Guide
Therapy for Them, Therapy for Me