Tip of the Hat, Wag of the Finger: Google & Rap Genius

Since its inception, Google has been fighting an ongoing war against spam. Spam sites, not to be confused with everyone’s favorite canned pork shoulder, attempt to game search engine algorithms through techniques like paid linking schemes, hidden text and keyword stuffing. Practices such as these are bad for search engines because they can dilute the relevancy of their results, while simultaneously making it harder for legitimate websites to be found by users.

Luckily, Google’s algorithm can usually detect this spam and demote the offending sites automatically. However, there are some advanced spam techniques that are capable of making it through this filtering. For cases such as these, Google employs dedicated spam-fighting teams to manually review sites and catch offenders that the algorithm misses.

This leads us to our “wag of the finger” recipient, Rap Genius.

Two weeks ago the popular music site had their “affiliate program” exposed by John Marbach (tip of the hat) as a linking scheme designed to obtain better result rankings for search results on Justin Bieber’s new album. As part of this scheme, Rap Genius offered to tweet out links to blog posts in exchange for a series of links to RapGenius.com being placed on the post (see below). 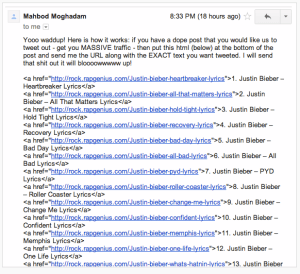 Marbach then made Rap Genius’ sneaky, no good, dirty rotten tactics public knowledge. Thus prompting Matt Cutts (the head of Google’s webspam team) to announce that Google would be manually reviewing RapGenius.com. As a result of that review, RapGenius.com has seen a severe decline in their ranking potential. In fact, Tech Crunch reports that adding “Rap Genius” to a query actually makes RapGenius.com appear even deeper down in results.

Ordinarily, external links to your site help improve your ranking potential. Google views external links as a signal that your site is credible, authoritative and high quality. However, tactics like Rap Genius’ “affiliate program” create links that are viewed as manipulative or unnatural because they violate Google’s Webmaster Guidelines.

So why did Rap Genius decide to use this rather unscrupulous tactic? Put simply, they wanted to grow their digital presence quickly. And in order to grow quickly, they need to rank well for searches for popular artists’ lyrics.

Linking “schemes” can be quick, short-term solutions to achieve improved rankings. However, these manipulative tactics never achieve the same long-lasting results that a holistic content marketing approach can achieve. Unfortunately for Rap Genius, Google does not take kindly to sites that try to cheat their algorithm.