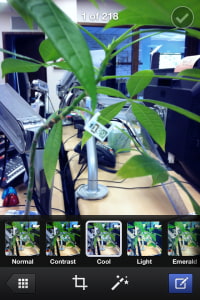 Well, thanks for asking, Dear Reader! Yes, Facebook acquired Instagram and it may seem redundant to have two types of photo apps, but they’re actually quite different, each with their own pros and cons!

So let’s break it down. Here’s the skinny on Facebook Camera and how it compares to Instagram.

As you can see there are interesting similarities and differences both between the new Facebook Camera app and the existing Instagram photo app.  Users can benefit from both apps; one almost compliments the other and the user experiences are different – photographers wanting to share photos with friends will probably do better with Facebook Camera, whereas photographers wanting to show off their creativity and otherwise build a following in the Interweb community should use Instagram. Will Facebook eventually envelop Instagram altogether to create a competition free SUPER camera?  Maybe.  Probably.  …Who knows…   For the time being,  Oneupweb is giving the Facebook Camera app a thumbs up.