These Big Brands Took a Google Penalty to the Face

There will always be someone trying to cheat, hoodwink or scam the system wherever money is to be made. In the early years of internet, snake oil salesmen ran amok, uncovering clever ways to “game” search engine algorithms in order to boost their rankings in organic search results.

Then the law of the land was written, but not all dudes abide.

Like all new frontiers, there has to be somebody to maintain peace and order. These spam fighters faced the daunting task of writing rules – and enforcing them – at the speed of technology. Google enlisted a rough and tumble band of spam-fight engineers to uphold the webmaster’s creed.

(There’s much more. Check out the full Google’s Webmaster Guidelines)

Bending these rules can prove costly for big companies. Being dropped from Google search results, even for a week, can add up to millions of dollars in lost revenue. Google penalties hurt. Then again, how much do you stand to gain by showing up on top of the search results? Here’s a look at six big companies that got tangled up with Google’s webspam team.

Whether these companies intentionally went against Google’s Webmaster Guidelines is hard to tell. The list of spammy practices is a growing one. In most cases, the companies say they didn’t know it was illegal. In all cases, the companies went back to Google, with hat in hand, asking for reconsideration.

In 2006, BMW’s Germany site got smacked with a Google penalty for spamming used car-related search queries.

What BMW did: They created loads of “doorway pages” that were stuffed with car-related keywords. Users, however, never saw these pages because they were automatically redirecting to the bmw.de site. Google, however, did see these pages. Here’s what one looked like: 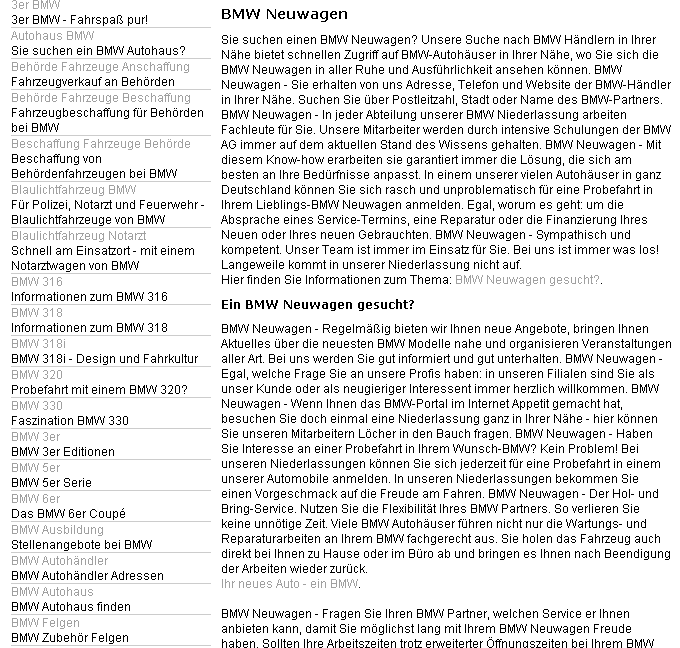 “That’s a violation of our webmaster quality guidelines, specifically the principle of “Don’t deceive your users or present different content to search engines than you display to users.”

“We did not provide different content in the search results to the final website. However, if Google says all doorway pages are illegal we have to take this into consideration.”

In 2011, Overstock got cracked for offering student discounts to schools in exchange for links on .edu sites. Links from these education sites generally carry more link equity.

What happened: Overstock was dropped from first page results from February 22 to April 21. The company said revenue dropped 5% as a result.

“We understand Google’s position and we have made changes to remain clearly within their guidelines.”

In 2011, JC Penney was outed for spammy yet effective tactics in an article in the New York Times.

What JC Penney did: They acquired a ton of links from irrelevant sites. The links had very specific anchor text around products on the JCPenney website.

Matt Cutts to the NYTimes:

“Am I happy this happened? Absolutely not. Is Google going to take strong corrective action? We absolutely will.”

In 2013, The lyric aggregator “overstepped” link building guidelines and received a manual penalty – just in time for the holiday season.

What Rap Genius did: They offered to retweet any blogs who would post a link to the Rap Genius website.

Google promptly responded to a tip, despite it being Christmas time.

@mmasnick @RapGenius we’re aware and looking into it.

According to TechCrunch, Rap Genius saw traffic plunge from 700,000 unique visitors a day to around 100,000.

The boys at Rap Genius admitted they were wrong, fixed the problem and appologized. They were back atop Google search results in about a week:

“First of all, we owe a big thanks to Google for being fair and transparent and allowing us back onto their results pages. We overstepped, and we deserved to get smacked.”

At first, everyone thought eBay’s traffic plunge was due to the Panda 4.0 update. Then it was believed that eBay was hit by a manual penalty. Google never commented on the eBay case, which is pretty standard. eBay also didn’t say exactly what happened. However, they did talk about the business impact:

So what happened? Search engine scientist Rishi Lakhani has a pretty solid theory: eBay created loads of doorways around its various categories. That’s the watered down version. If Rishi was judge, here’s his verdict:

“I have seen them before and analysed them and even joked “BHP” stands for “Black Hat Pages”, but I would like to stress, I DON’T think that there was anything wrong in the way the site created and optimised these for the serps. It was pretty clever actually, but I think it WAS overdone.”

Read the full report on RefuGeeks.
Search engine optimization is a developing science with some murky rules. As we’ve seen in the examples above, some SEO vendors can take it a little too far. The best way to stay in good grace with Google is to pick an SEO partner you can trust, one that stays up to date with the latest guidelines. And if you happen to step in it, here’s how you get that Google penalty lifted.