We’re determined and confident that we’ll win this year’s competition by having all of us Oneupwebbers participate. Our 40+ staff walked, biked, jogged, rolled, carpooled to work this morning…our parking lot is nearly empty (carpoolers are the only ones parked)—so choice! Our official team name, Oneupweb = Ctrl-Alt-Defeat, is pretty gnarly too. Although we’re serious about commuting in a greener manner, we like to entertain as well…just check out this morning’s act: 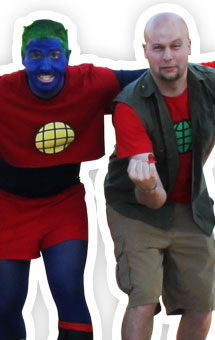 That’s right we commute in style. Want to groove on your way to work tomorrow? Memorize these lyrics and belt them out as you commute to your job:

“You’ll pay for this Captain Planet!”

We’re the Planeteers
You can be one too
‘Cause saving our planet is the thing to do!

Looting and polluting is not the way
Hear what Captain Planet has to say!

“The Power is Yours!”

And if you want some alternative ways to get to work…this morning Mashable posted some very unique eco-friendly transportation ideas. Any creative ideas on how we should arrive to Oneupweb for the rest of the week? Gives us your suggestions in the comments section. Happy Smart Commute Week!